All Together – West Coast IPA

The brewers at Other Half designed this recipe to be flexible so that with a couple of modifications, it could be either a West Coast IPA or a New England–style IPA. This is for the West Coast IPA version.

SKU: CMTYRCP-0307 Categories: All Grain Recipe Kits, Choose Your All Grain Kit by Beer Style, IPA Recipe Kits Tags: All Grain, All Together, COVID19, Other Half

This is a Community Recipe created by andy-stewart

The coronavirus pandemic has hit the hospitality industry hard, as bars, restaurants, and breweries have had to adapt to a situation where most people are staying home. Many have had to lay off workers while jobless numbers hit record highs.

Looking for a way to help, the brewers at Other Half Brewing in Brooklyn, New York, devised a plan: an open-source collaboration beer, in which any brewer can participate and make their own version, with proceeds going to support hospitality workers in dire straits during the pandemic.

To that end, they launched a website—alltogether.beer—explaining the initiative and offering the recipe. So far, more than 150 breweries across the country have agreed to brew beers based on essentially the same recipe, using proceeds from sales to support the cause either locally or nationally.

The brewers at Other Half designed this recipe to be flexible so that with a couple of modifications, it could be either a West Coast IPA or a New England–style IPA. What follows immediately below is the West Coast version; see below that for the hazier, less bitter New England version.

More information can be found on Beer & Brewing 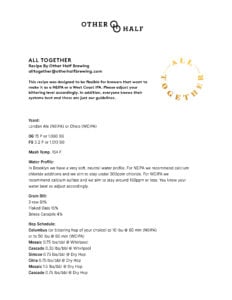 Taken from the All Together IPA project – this is the west coast version.

In Brooklyn, we have a very soft, neutral water profile. For the West Coast version, we recommend calcium sulfate, and we aim to stay around 150ppm or less.