This is a guest blog post from Sam Tait at the UK National Homebrew Competition: 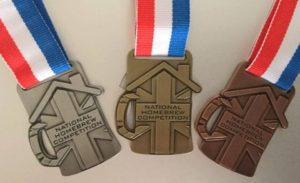 The UK National Homebrew Competition has been running since 2012, and this year returns again to New Bristol Brewery on the 15th February.

With over 400 entries from around the world vying to be declared best homebrew in Britain, this is one of the biggest event of its type in the country, and we’d like to think , one of the most prestigious.

To have a competition, you must have rules, and the UKNHC is run under Beer Judge Certification Programme rules. Judges undergo sensory training, sampling a wide variety of world beer styles in an attempt to build up a ‘sense memory’, extensive training in off flavours and passing theory and tasting exams to make sure your brew only receives attention from the best trained palates.

Before the day, all of the entries are unpacked – volunteers, fuelled by nothing more than beer and pizza, have unboxed them, stripping out some of the ‘interesting’ packaging materials (seriously, please don’t stuff your beer into used socks, clean nappies or slices of camping mat gaffa taped to the bottles …), logged them into the system, and arranged them into styles ready for the big day.

From near and far, bleary eyed and chilly, judges and stewards trek to the venue. There’s a chance to reacquaint yourself with old friends from all around the country, swap brewing tips, and for those that’ve travelled a distance, recharge with a quick cup of coffee and a pastry (or three).

The Head Judge and Head Organiser give an outline of the day, informing judges and stewards the timing of the sessions, the grouping of the styles, and assigning pairs of judges to beer flights. Care is taken to pair up the more experienced judges with the less experienced, and to make sure people judge the types of beer they like and don’t end up judging flights they’ve entered …

Judging sheets, crackers, mechanical pencils and water at the ready – we’re off. 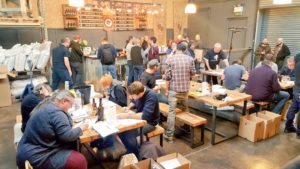 Under BJCP rules, when a beer is entered it is listed against a style, which outlines what the judge should expect to perceive when tasting a beer. Beers are judged objectively against the Style Guidelines – with the BJCP, it’s not about ‘whether I like it’, it’s about ‘how well does it meet the style’.

Each beer is bought to the table by a steward and a pair of judges sample it, considering the aroma, flavour, appearance and mouthfeel. Points out of 50 are awarded, describing what they’ve detected and with advice on improvements.

After each beer, the scoresheets are handed in, totals totted up and checked by the stewards and it’s on to the next beer in the flight. There are usually around a dozen or so beers per flight, and styles are grouped with like styles to keep the numbers similar – entering the only American Light Lager in the competition doesn’t guarantee a Best in Style win!

Each session usually consists of 2 flights of beer, selected so that the intensity of flavour and strength increases during the day – the lessons of the year where an unfortunate pair of judges were given a dozen Russian Imperial Stouts at 9am have been learned – and at the end of the flight, the Best in Style is selected by the table, along with a 2nd and 3rd place brew.

A key component of a successful competition is lunch. The judges are giving up their time for free and we want to make sure they’re well looked after. The trick is finding something filling which appeals to 50 or more judges, can be produced in volume in not a lot of time, but doesn’t damage your palate or smoke out the venue. It’s a trickier task than it sounds. 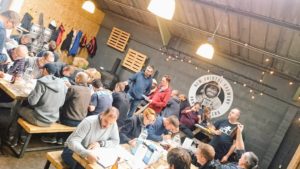 More of the same as the morning session – the judges have warmed up now, so they crack through the flights with increasing speed, sampling, swilling and scoring their way through to the finish line.

With the bulk of the judging done, we’re now down to sorting out the very best from the Best of Style winners.  The second bottles are opened for each of these entries, decanted and reconsidered.

First comes a quick pass to thin the field down. Tthe most experienced Beer Judges in the competition sample each Style winner, and the twenty or so are culled down to the top half dozen. Then comes the voting haggling, with passionate arguments as to whether *this* example of a Munich Helles beats *that* example of an American Wild Ale.

Finally after much debate (and hopefully no fistfights or serious fallings out), the Judges decide on a top 3 and an overall winner. 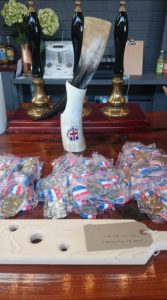 Livestreamed to the world via the wonder of the Internet, the Head Judge lists the winners, first the Best in Style, then onto the top three overall Best in Show.  There’s a prize for the winner, for the ‘Best Brewer’ who has accumulated the most placed beers in the competition, and also for the winning homebrew club. Everyone can relax a bit and enjoy a beer – if you really want any more that is!