Traditional styles brewed with this yeast include but are not limited to Belgian Witbier, American Wheat, Berliner Weiss, Gose, Hefeweizen, Dunkelweis, and Weizenbock

LalBrew Wit™ yeast is a relatively neutral strain which can be used to produce a wide variety of wheat beer styles. Ester and phenol production is lower than for traditional hefeweizen strains such as Munich Classic. LalBrew Wit™ provides a baseline profile of banana and spice aromas, but leaves space for the brewer to showcase other spice additions typical of Belgian style beers. Traditional styles brewed with this yeast include but are not limited to Belgian Witbier, American Wheat, Berliner Weiss, Gose, Hefeweizen, Dunkelweis, and Weizenbock

Classified as a Saccharomyces cerevisiae, a top fermenting yeast.
Typical Analysis of LalBrew Wit™ Yeast:
Percent solids  93% – 97%
Living Yeast Cells  ≥  5 x 109 per gram of dry yeast
Wild Yeast  < 1 per 106 yeast cells
Bacteria  < 1 per 106 yeast cells
Finished product is released to the market only after passing a rigorous series of tests
*According to the ASBC and EBC methods of analysis

Vigorous fermentation that can be completed in 4 days

Aroma and flavor is somewhat estery with banana notes
The optimal temperature range for LalBrew Wit™ yeast when producing traditional styles is 17°C(63°F) to
22°C(72°F)
Fermentation rate, fermentation time and degree of attenuation are dependent on inoculation density, yeast handling, fermentation temperature and nutritional quality of the wort. 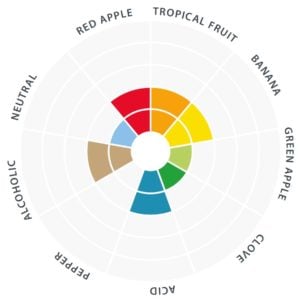