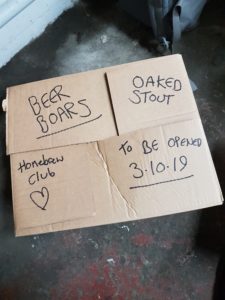 So, the results of our oak ageing experiment are in. If you haven’t read the first part of this series, check it out here but as a quick recap, the Beer Boars East London homebrew club carried out an experiment into oak ageing using three different products supplied by the Malt Miller: bourbon barrel oak chunks, ProvOak US hop pellets that include bourbon barrel powder, and Mangrove Jack’s Oak Flavouring. We brewed a stout and split it four ways, three batches using the oak products and reserving one as a control batch.
The purpose of the experiment was to learn more about the different products, evaluate the impact that they have on beer, work out if we could tell the difference, and ultimately decide which one we like best – both in terms of flavour and usability. 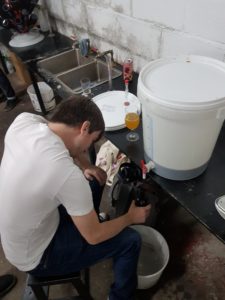 After fermentation, splitting the batches, adding the oak products and bottling, a blind tasting was held at our October club meet with seven brewers (plus myself) taking part. Several of our members regularly judge or steward at homebrew competitions, and although not all of us are BJCP qualified, between us we have a lot of experience of tasting beer.
We had a group discussion after tasting each one, writing down our thoughts on aroma, flavour, any other comments, and guessing which oak product was used. The oak products were only revealed at the end of the tasting, and we had a few surprising results!
Control Batch
For the control batch – the plain stout with no oak additives – the aroma was chocolate and coffee, although fairly light overall, with some subtle hoppy notes. The flavour was malty, nutty and sweet, but with a dry finish and moderate bitterness. There was a slight booziness too, although it wasn’t unpleasant. As a base beer it was pretty solid.
Five of our members correctly identified this as the control batch, with two believing this to be the beer with bourbon barrel chunks. Although no oak products were used, a few tasters detected the beer as having bourbon notes, which perhaps is down to the power of suggestion and an expectation that the beer would have some barrel character.
Bourbon Barrel Chunks 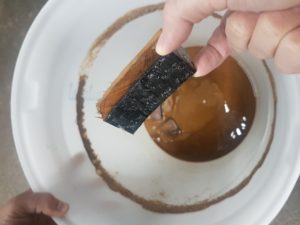 For the beer with bourbon barrel chunks, the overwhelming aromas were dark fruit, vanilla, coconut and oak. There was also a pronounced roastiness that wasn’t as prominent in the other batches. Flavours were complex, with a really pleasing combination of chocolate, bourbon and sweetness, but also some heavy tannins.
All of our members got this one wrong, with all seven expecting this to be the beer with the oak flavouring! For me this was maybe the biggest surprise of the evening; the bourbon and oak flavours were really vivid in this beer, I think maybe everyone thought that they were so pronounced that a flavouring must be responsible.
Oak Flavouring
The flavoured beer had pleasing toasty and chocolate notes along with some unexpected fruity aromas that some of us described as berry and others said was slightly tropical. There was bourbon character, but it was subtle. It had a definite rich oak flavour, as well as coffee, bitter dark chocolate and floral notes. Some said there was a tannin flavour, but it was light. Overall it was similar to the base beer, but with a little extra something. 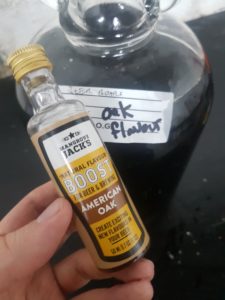 The group was split on this one, with four guessing the ProvOak hops, two believing it to be the control batch and one certain it was the barrel chunks. Nobody suspected the oak flavouring!
ProvOak
Finally, the ProvOak hop pellets. I have to come clean here and be honest –  unfortunately this batch suffered from an infection and had a lot of off flavours (I’m absolutely gutted). Despite that, it had a citrusy, grassy aroma and there was “woody” or “barrel” notes too, but without the heavy bourbon or tannins present in the other batches. The flavours noted included coffee, citrus and grass.
Two tasters correctly identified the ProvOak hops, four believed it used barrel chunks and one thought it used oak flavouring. Some tasters assumed the barrel chunks presented the highest risk of infection so this may have swayed their judgement. After a discussion we agreed that the wood flavour wasn’t dominant, but seemed to develop over time in the glass, and some of us said the beer seemed to have a smoother body than the other beers, although I’m not sure if that can be attributed to the experiment. It’s a shame this batch was infected as it could have been a great beer.
Conclusions 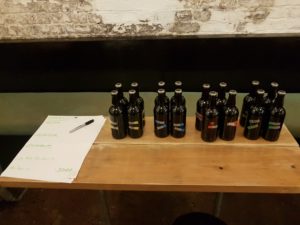 Which did we prefer? The products all do different things, so it’s hard to pick a winner, but in terms of flavour we loved the bourbon barrel chunks, even though everyone suspected that the oak character was a flavouring. The barrel chunks completely transformed the base beer, with the barrel flavours and aromas really enhancing the beer. It is perhaps the most “authentic” product and imparted the boldest flavours, although if we were going to brew a beer with these chunks again I would use far fewer – perhaps only one per ten litres. They were easy to work with, literally just steam them for ten minutes then carefully drop them in or rack on top, and each bag has plenty in so should last you a good while.
The oak flavouring was milder, if followed as per the instructions on the bottle, but we experimented afterwards by adding a little of the flavouring directly to the beer in the glass, and found that a higher dosage gave the beer a real oak kick – although without the rich boozy bourbon notes you get from the barrel chunks. Our recommendation would be to be generous with the oak flavouring, the complete opposite of the chunks, where less is more. The benefit of the flavouring, compared to the chunks, is that you have greater control over the dose so are able to adjust to your own preferences. It’s the easiest product to use, you just need to add before bottling.
I’m gutted that the ProvOak batch was infected and I’m certain it had nothing to do with the product itself (note to self; never take sanitation for granted!) It’s a really interesting new product and it’s great that you can get an oak flavour from dry hopping, a technique that many homebrewers will be familiar with. However, you have to remember that the pellets are primarily hops so the hoppy flavours and aromas will far outweigh the barrel character. If you are looking to add dry hops and also want a subtle oak flavour to complement, they are a great option. You aren’t able to control the strength of the oak character as you are with the other products, but I think they’ve included just enough to give you the best of both worlds when it comes to hops and oak. It’s a good addition to the market and we will be using them again.
Thank you again to Malt Miller for providing the ingredients to carry out this experiment, and thanks to Brew Club in Hackney Central for hosting us. If you’d like to contact us or come along to a future meet, please do get in touch through Twitter (@beer_boars) or Facebook (search Beer Boars).
Cheers! Jon.