Back a few months ago we were contacted by Matt from Homebrew Collab about helping to support a comp their club was running. We’re always up for helping clubs out and being involved in competitions that help brewers grow and improve their brewing, and receiving beers too. 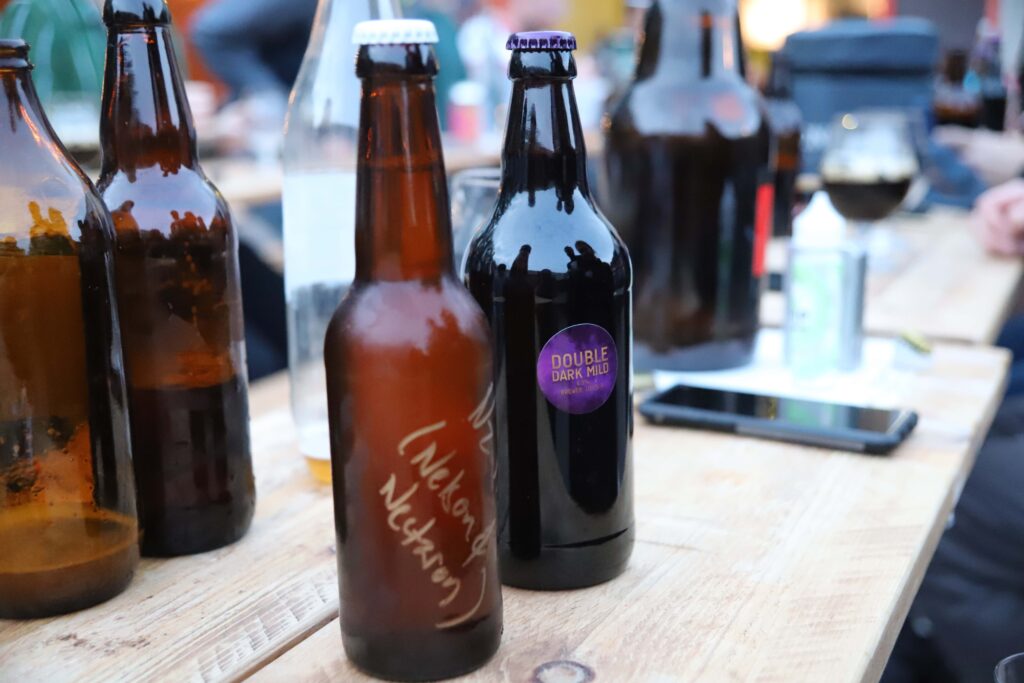 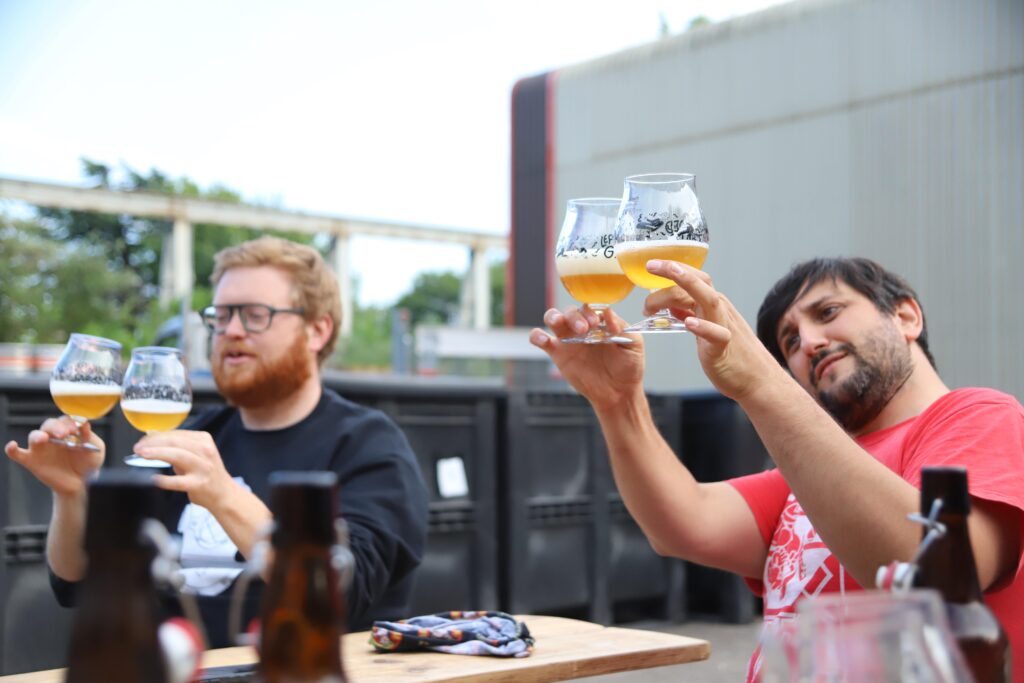 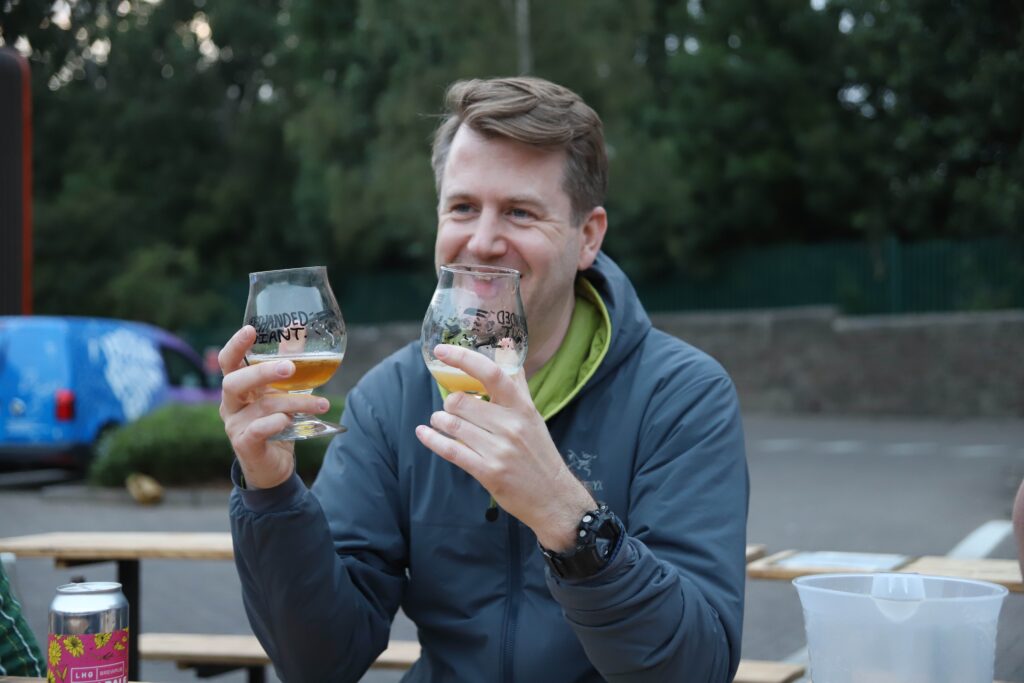 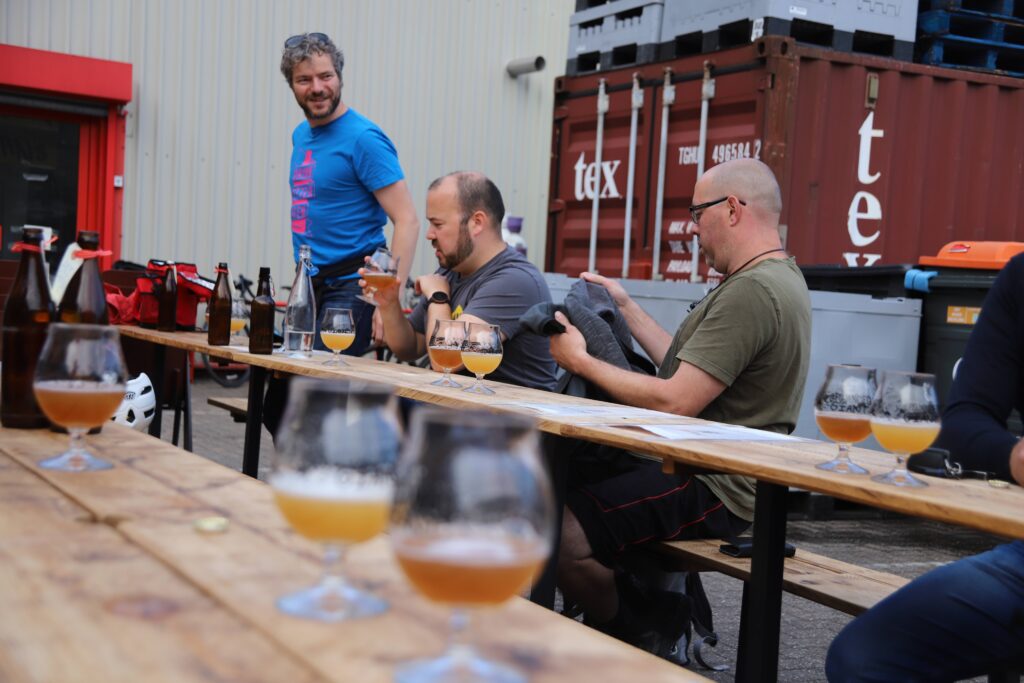 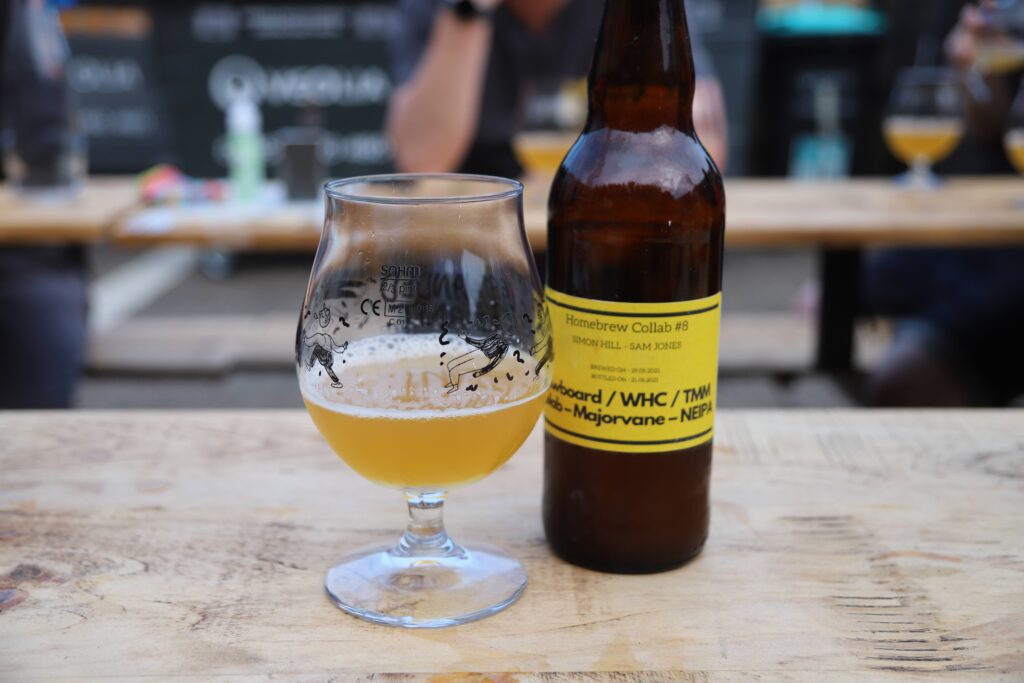 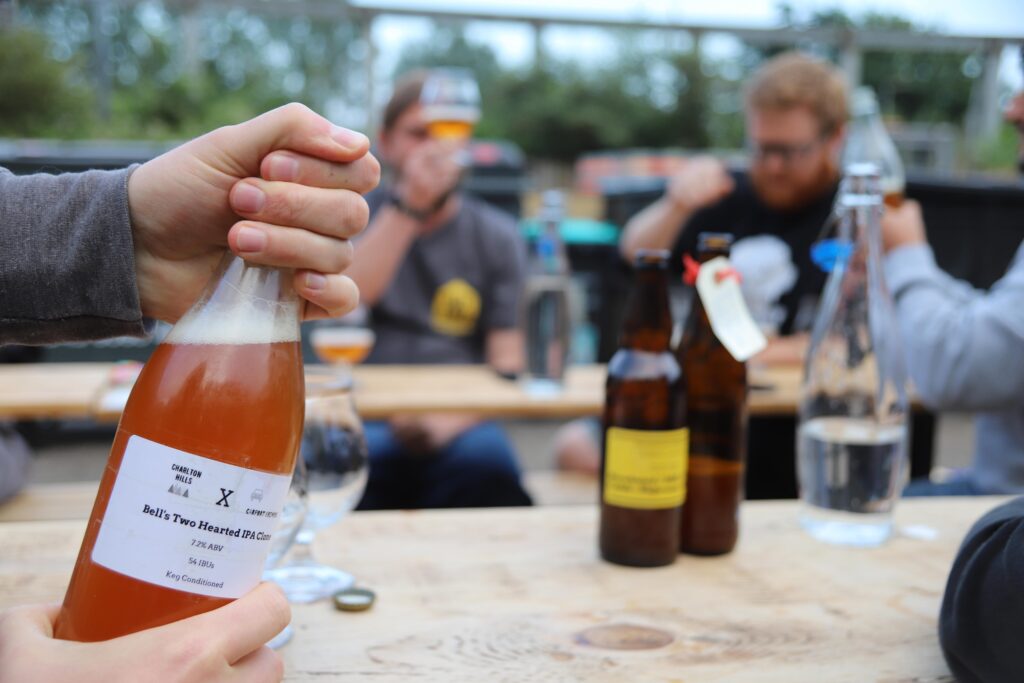 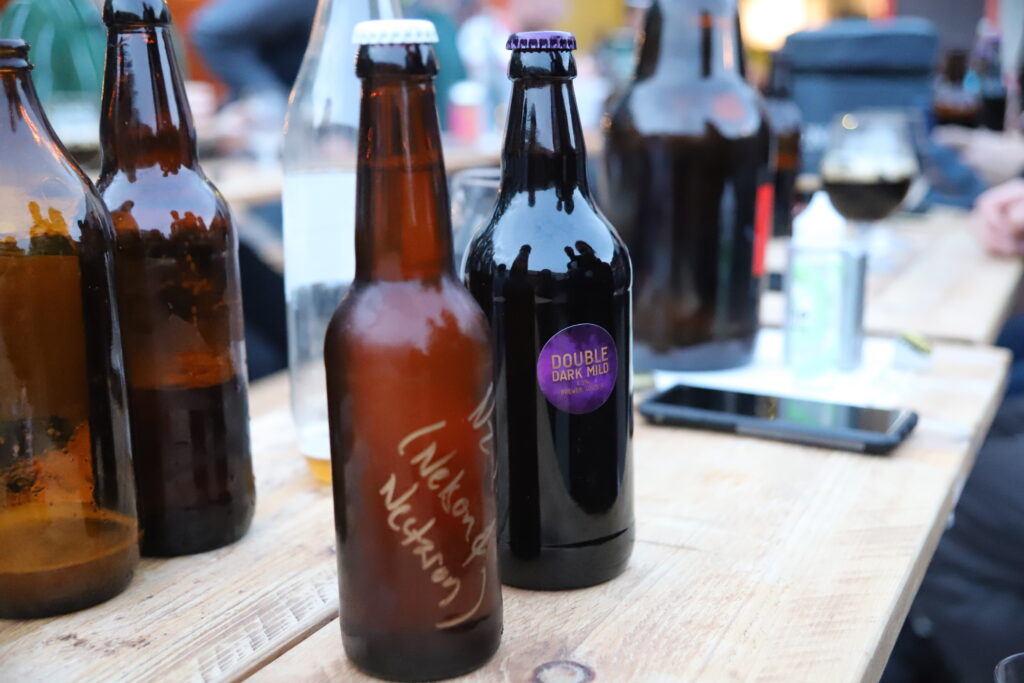 Homebrew Collab was founded in a shed in a Bristol garden in 2018 by Matt Hazley and Michael McKelvaney – the idea being less about creating a classic homebrew club, and more about running a bunch of ‘collaborations’ with local homebrewers, all brewing to a brief and then comparing & discussing the outcomes. Kind of like… education through collaboration.

There have been 8 collabs so far and they’ve been quite varied. For the inaugural event in 2019, Coffee and Beer on Cottam Hill in Bristol gave each brewer 250g of locally roasted coffee to use in a brew and then following that, Two Belly challenged is to brew a beer to pair with a Cornish cheese! There’s also been a “Summer SMasH Off”, “The Beers of Autumn” and the (not so) famous Christmas “Reinbeer Project”, where each brewer had to draw a Reindeer from a hat and brew a tribute to them.

Most recently, collab #8 was called “Clone Wars”, where two brewers were given the same Malt Miller recipe kit each and then the resulting beers were side by sided to discuss the differences – this was a real eye opener in some cases, leading to lots of chat around the table about water profiles, fermentation tactics and equipment hacks!

Now, two years later, Michael has kickstarted Newtown Park Brewing Co (now the crew’s spiritual home) and Matt continues to bring together a 15+ strong group of home brewers, from Bristol, Bath and Stroud, about 4 or 5 times a year (with plenty of waffle in between).

We here at The Malt Miller were lucky enough to given a set of the beers that the guys all brewed from our beer kits to taste and judge the results.

8 different beers were brewed, so yes that 16 beers to taste and review, no easy feat but I thought I could get this done and as I learnt it certainly wasn’t something you could try and do in one night.

First task, order of drinking had to be decided, and I went for the following order:

Yu Lu is an intricate beer with layers of flavour that remain distinctive, yet work in perfect harmony. The name alludes to the mystical history of the humble tealeaf, which delivers subtle bergamot orange and lemon notes here, accentuated by the addition of lemon zest. Yu Lu offers balanced flavour that belies its low strength. It’s a perfect, refreshing drinking for any occasion.

Now this I expected to be one of the more difficult beers to brew, its light, refreshing, and you have to balance the delicate flavours of tea and hops. Of course also there are so many different teas to choose and this gives the brewer a chance to individualise the beer, or to totally screw it up.

Dan hunted out a rather individual and great sounding tea to use in his interpretation (I should have made better notes, sorry), but his beer came out slightly darker than James, but both good beers, and a great start, I ended up drinking the whole bottle of both and knew at this point I was going to struggle if they were all this good.

This seriously good NEIPA pulls its fruity magic from Sultana, Comet and Hallertau Blanc, put to work by Framgarden Kveik. A meeting of minds, methods and ingredients that’s made a grapefruit, pineapple and lemongrass masterpiece.

A pretty tasty NEIPA, a little bit of lactose in there to smooth things out, and use of Framgarden Kveik yeast from WHC.

Entrants were Sam Jones with Simon Hill and Remy Martin

The opening of Sams beer the hop notes just jumped out of the bottle and the glass when pouring it, so fruity. Then Remy had delivered great mouthfeel and body with his version of the same beer.

One of the original craft beer pioneers, Sierra Nevada Brewing Co, founded by Ken Grossman, have been going since 1980. Brewing equipment wasn’t easily available in the early days and Grossman had to retrofit used dairy equipment to form his first brewhouse; a lot has changed since then! Sierra Nevada Brewing Co. arguably kicked off the entire craft beer movement with the release of their, still to this day, seminal Pale Ale. Since then they have been pumping out some of the best beers American has to offer and they still do! If you’re after hop forward beers with class and distinction Sierra Nevada is the way to go!

Torpedo Extra IPA is an aggressive yet balanced beer with massive hop aromas of citrus, pine, and tropical fruit.

This is recipe that Sierra Nevada released themselves, the interesting thing is the use of Magnum (typically used for bettering) as the main hop in the beer and it also being used in dry hopping. Like a traditional IPA this features crystal malt, so there is a risk of this beer oxidising easily.

Entrants were Willis Brewery and Sam B

The beer from Willis Brewery, this had that slight roasty taste from the crystal malt there, and it was really drinkable and I pretty much the drank the whole bottle rather than just a taster of it. Then the beer from Sam felt much smoother, more rounded, and softer mouthfeel to it, so much so I drank all of that one too.

Focal Banger is more hop-forward than Heady [Topper]. While Heady has a more complex hop profile and a stronger malt backbone, Focal is all about the Citra and Mosaic hops. At 7% and with all pale malt, it is much easier to drink two of these than it is with Heady Topper. The tropical fruit in the Focal is delicious.

I love this recipe, as I know Cuan drinks some great beers and did a fair amount of development on this recipe he kindly shared using the Recipe Generator so that others could brew it.

Entrants were Rob I and Storma

This was another one of those that when you opened the bottles you got the hop aroma jump out the bottle and just keep on oozing out the glass. The bottle from Storma was a really interesting shape, and both beers presented well on tasting them.

Brewed with 100% Centennial hops from the Pacific Northwest and named after the Two Hearted River in Michigan’s Upper Peninsula, our American IPA is bursting with hop aromas ranging from pine to grapefruit from massive hop additions in both the kettle and the fermenter.

Perfectly balanced with a malt backbone and combined with the signature fruity aromas of Bell’s house yeast, Two Hearted® is remarkably drinkable and well suited for adventures everywhere.

Now anyone who knows me knows I have a kind of obsession with this beer and the original is my favourite beer, the beer I’d happily choose if I could only ever drink one drink for the rest of my life. That and the love for centennial hop too, so no pressure guys.

Sorry guys, you did get the hardest beer to please me with as I’ve brewed this so many times, and drunk the real thing lots. Not sure if you tweaked the malt bill or if it was the standard kit we offer, or if it was the time of night but they looked darker than my usual brew of it. I usually go for the premium kit we sell as that has a spot on colour as well as using BBC Centennial and the actual Bells yeast, which I understand you guys used too.

It was at this point that I then had to stop for the night and realised I’d had some cracking beers and that because they were do good I’d gone well beyond sampling on most of them.

Saturday was then also pretty much a recovery day and the remaining beers were saved for Sunday enjoyment.

Saison Dupont is a classic Belgian farmhouse ale. This is a beautifully balanced, complex beer that has a refreshing fruitiness and long, dry finish. It is bottled unfiltered so it may be cloudy or have a slight sediment but this is normal and perfectly natural.

Ok, now this one is a tricky beer to brew, you can tweak it with mash temp, fermentation temp, and the yeast Wyeast 3724 Belgian Saison can be a bit of a pain to use also.

This one I was dreading and also looking forward to, a great beer, but one that so many can struggle to get right. But I have to say both entries were really good, one slightly over carb’ed and the other slightly under. But both looked great in glass and Euan had got the level of yeast esters just right to give some spice to it.

A huge Mild. Thick and sweet and delicious. 6.3% rather than our normal 3.6%, with ridiculously mild flavours all up in your face. Mega plum and raisin with a hint of roast and creamy, full body.

This beer in itself is a bit crazy, mild is usually thin and easy drinking, low abv, but this is just so plummy and has body to it.

The entrants on this was Jack Forsey and Louis G

Both really good, one slight smoother than the other, rich creamy one slightly more bitter than the other, there was very little in it at this point. Oh and Louis G, do you possess super strength or something? I have to dig out one of those things to unfastening screw tops that feel like that glued onto the bottle.

So the results, which beer did I think cloned the original best? Which beer was the most enjoyable?

Well firstly well done to all that entered, the standard was excellent, the beers really enjoyable (unlike Saturdays hangover) but this is the order in which I judged the entries:

From the beers that we tasted J McBride had one of the hardest to get right, hit it spot on and it was also one of the most enjoyable beers of the tasting so he gets first place, closely followed by Euan and Storma which we would happily drink more of those beers as they were really good.

But a big well done again to all that entered, it was great to see so many of our beer kits in bottles and get to drink them.

Having spoke to Matt their winner on their nigh was, Jack Forsey’s Box Car took, but like myrself, they were a bit all over the place after that many beers!

For the next collab, Homebrew Collab will be going up against Rebel Homebrew Club from Wales in an interclub competition. This involves drawing a bunch of BJCP styles from a hat and then each club brewing these; then we send them all to independent judges to see which club wins! After that, there’ll be the Christmas event so if you want to get involved, keep an eye on the socials!